What's in a name?

We are excited to announce that effective on April 1, 2016, InControl will become Axial Control.

Our new name and logo reflect our continuing effort to provide a holistic approach to home automation.

Our company will continue to operate in its current structure. There has been no change in our products or staff so expect the same outstanding service and quality you deserve.

We appreciate your continued support and look forward to meeting your home automation needs with our exceptional service and products.

Continue to our new Site

This demonstrates how to turn your motion sensors and door/window sensors into an alarm system. Complete with email notifications. Siren optional!

During one summer afternoon a few years ago, I was paid a visit by a door to door salesman selling home alarm systems. I was interested right up to that point where he told me how much I'd really be paying and for how long. This company wanted a 3 year contract and almost as much per month as my cell phone provider (and they already over-charge as it is!) I decided that I could build my own alarm system for cheaper and it would be much more fun. That's how InControl was born.

This tutorial will discuss how to setup InControl to function as an self-monitored alarm system. We'll take advantage of InControl's Virtual Devices to keep track of the status of the system. 3 scenes will be utilized to monitor motion and door sensors and to sound the alarm or send an email when something doesn't seem quite right.

In my home, I've got a series of 4-in-1 Motion Sensors from Aeon Labs, a couple Door/Window sensors and a FortrezZ Siren to make a lot of noise.

I utilize an InControl virtual device to keep track of the status of my system: either Armed or not. Go to the Plugins menu and choose "InControl Virtual Device" and add a new one. Choose a device of type "Switch" and name it "Armed Status." Choose OK and after a few seconds you'll see it show up in your list of devices. 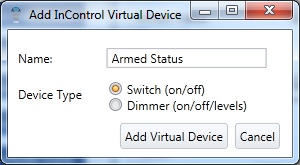 The first scene we'll create will actually 'Arm' the system. Create your new scene - name it "Alarm System ARMED." When I arm my system, I want my FortrezZ siren to light up to give me some visual feedback, so I have the dimmer slider turned on but not up high enough to trigger any sound.

I also set my virtual device "Armed Status" to on to signify that the system should start watching for alerts.

I have a 5 second pause (click the arrow next to the Add Device button to get this option); after the pause I lock my door and turn the Siren light off. My house is now armed.

Now create a sister scene that has the same devices. This scene will be used when you arrive home to disarm your system and return things to normal. In my scene, I have my siren set to off -- just in case I accidentally tripped my alarm. I also set the virtual device "Armed Status" to off so that my system will stop monitoring events. 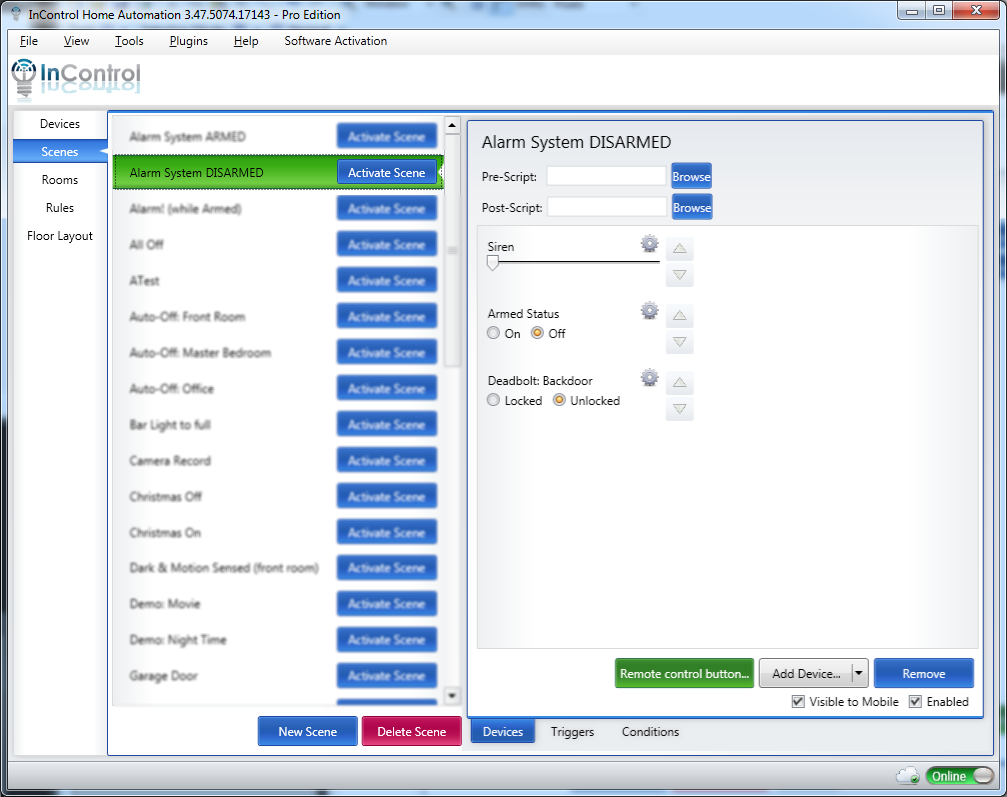 Finally we'll create the scene that does all the heavy lifting. Name it "Alarm!."

To get an email, choose the EmailSceneStatusReport.cs script using the Pre-Script's browse button. Make sure you've setup your email in the Tools/Options menu.

In my scene, I've only got a single device -- my siren and it's turned all the way up so that it'll flash and make a lot of noise to scare away any would-be bad buys. 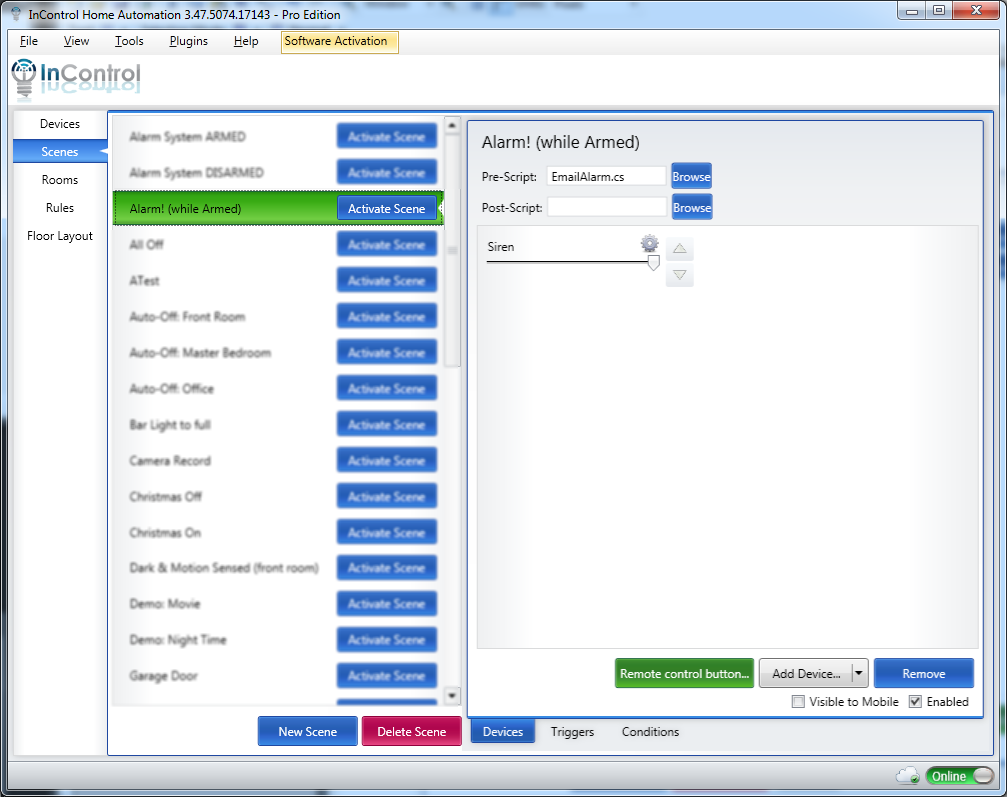 As promised, here's the meat of the system. Head over to the Triggers tab on your Alarm! scene. You'll add a Device Trigger for each of your motion sensors and door/window sensors. If any of these are tripped, it'll activate the scene. Click the down arrow next to "Add Time Trigger" to find the option for adding a device trigger. Here's a sample of a door/window sensor device trigger: 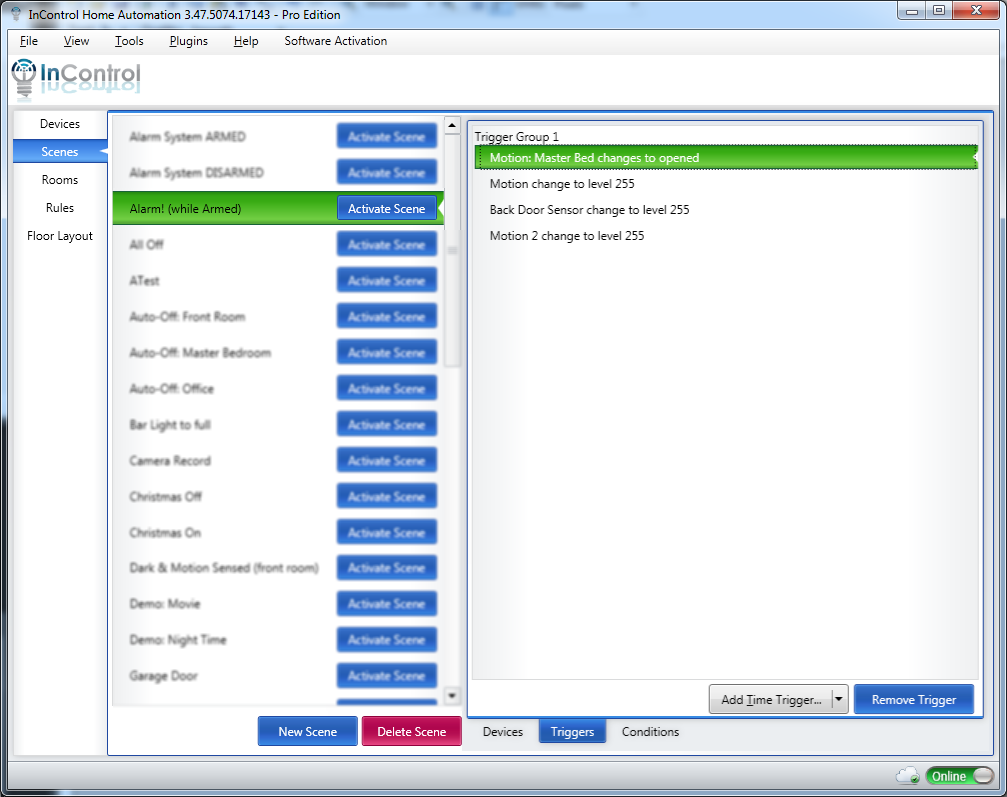 Click the down arrow next to the Add Time Condition and choose Add device at state. Make sure your options read like mine do in the following screen shot:

That's it! Your alarm system is ready to go.

If you want to get a little more fancy, you could add some IP cameras to your setup. Add them to your Alarm! scene. This will take a picture with all your IP cameras and email it to you so you can see what's going on when an alarm is activated.